Familiarising yourself with what’s in season is a subtle and satisfying way of reconnecting with nature, especially if you live in a town or city. Noticing the different produce on offer will give you a greater awareness of nature’s cycles—and an enhanced appreciation of fresh, whole, delicious food.

Asparagus are in season from May to July. For this reason, they often crops up as a special dish on summer menus.

Believe it or not, asparagus are related to flowers! They are the young, cultivated shoots of the lily plant. The spears are both delicate and difficult to grow, which means they often some of the most expensive vegetables on offer, even when in season.

There are lots of different varieties, each with unique characteristics and subtle flavours. British asparagus tend to be green, while French soil gives rise to purple spears. White asparagus, which have become fashionable in recent years, tend to hail from the Netherlands or Spain.

WHY SHOULD I EAT THEM?

It’s worth treating yourself to asparagus, as you’ll be buying a host of health benefits. For example:

They support consistent energy. Asparagus are a rich source of folate. This vitamin—which is also known as folic acid—assists in the formation of red blood cells, enabling oxygen to be transported around your body. An inadequate intake of folate can lead a type of anaemia, resulting in symptoms such as fatigue, dizziness and insomnia [1]. Happily, one cup of asparagus (roughly 180g) contains over 60% of your recommended daily intake of energy-supporting folate.

They exert an anti-inflammatory effect. While some inflammation is an important part of an immune response, generally we want to minimise the low-level, chronic inflammation that underpins many disease states. Asparagus contain special nutrients called saponins. When consumed, these have been found inhibit the production of certain inflammatory molecules in the body, thus minimising the inflammatory load [2].

They are rich in antioxidants. There are lots of different antioxidants, but king of them all is a substance called glutathione. This antioxidant is so important that our bodies make it themselves, but a few foods also contain it in its preformed state. Asparagus are one of those foods! ‘Antioxidant’ can seem a bit of a woolly term, but really it means a substance that helps to combat the daily wear and tear inflicted on our cells (and thus our bodies as whole). Food-based antioxidants play a role in fighting everything from heart disease to wrinkles [3]. 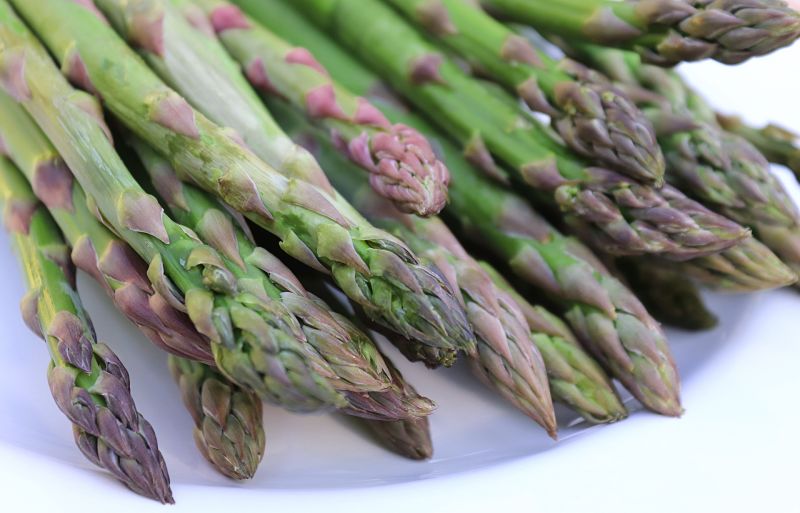 WHAT SHOULD I LOOK FOR WHEN BUYING ASPARAGUS?

Choose shoots that are straight and firm. Tightly furled (rather than splayed) tips are indicative of freshness.

Asparagus perish quickly, so it’s best to eat them on the day of purchase. To increase their shelf life in the fridge, wrap the ends of the asparagus spears in some damp kitchen towel. This should keep them fresh for up to two days. For similar effect, you can also pop them in a glass of water (much like cut flowers).

HOW CAN I PREPARE THEM?

The delicate, savoury flavour of asparagus is best appreciated when the spears are cooked simply.

For thicker stems, bend them until they snap, and discard the woody ends. Thinner stems may simply require a quick trimming at the base. Steam for 3–5 minutes, or drizzle in a little olive oil and roast at 180˚C for 15 minutes.

For an easy starter or impressive side dish, serve with some toppings:

A knob of high-quality butter and a generous sprinkle of sea salt.

A tablespoon or so of grated parmesan, with a squeeze of lemon juice.

A fried organic egg and a few crispy prosciutto pieces.

Asparagus are also lovely when cold. Try adding to salads (they work especially well with peas), throwing in a frittata or using as soldiers for a boiled egg!

For bespoke recommendations, book in for a free 10-minute exploratory phone call.