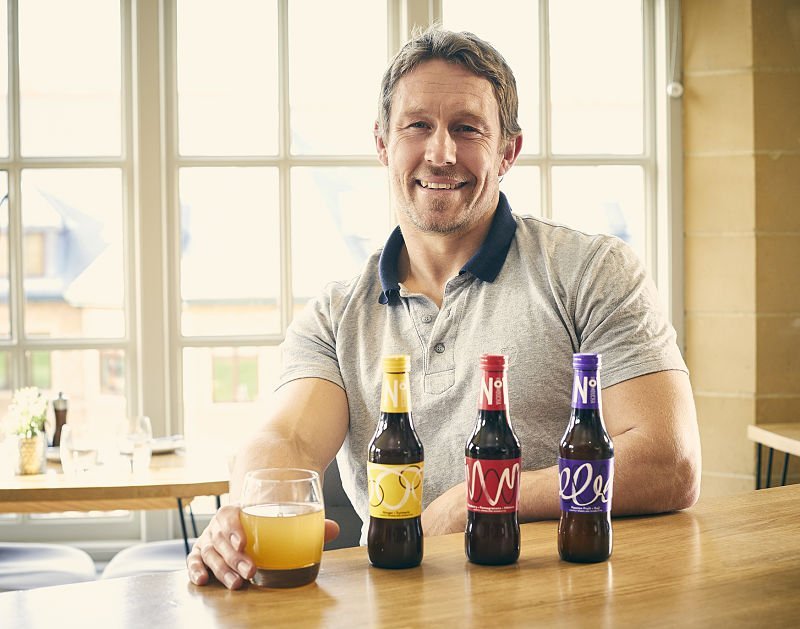 Jonny Wilkinson CBE is a former rugby player. Having represented England and the British and Irish Lions—including scoring the winning drop goal in 2003’s Rugby World Cup final—he’s widely regarded as one of the best rugby union players of all time.

Today he is a studio pundit, working on the coverage of the Six Nations Championship and the Rugby World Cup. In a departure from rugby, he’s also the founder and creator of No. 1 Kombucha.

Kombucha—tea fermented with good bacteria—has been drunk for centuries in China, and is rapidly gaining popularity in the UK. Although current research is limited, anecdotal claims link consumption of kombucha to optimising gut health, reducing inflammation and boosting mood.

In this soul-searching interview, Jonny reveals his journey to making kombucha, his new perspective on health, and why we should all focus on life from the inside-out…

How would you describe your role at No. 1 Kombucha?

My role has been pretty much behind it from the beginning. Around 6 years ago, I felt like there was something missing around the healthier side of food for consumers. I had a real desire to do something in that space. As it was, the journey took a long time, and we went down several dead ends. But I followed the journey through—and it mirrored a personal evolution.

I was gently moving into more of an open-minded outlook, which was connecting me more deeply to all things physical. I’d had incredibly strict, black-and-white values around my playing career, and myself as a person while I was playing that career.

Everything was so functional. It was about fitness and becoming something, instead of just harmonising with this incredible and unreplicable machine [the human body] that’s constantly surprising us. I realised that health and being is the fundamental aspect, which precedes any kind of fitness and doing. Health is the beginning of all things.

For me, the evolution was about going inwards. And it has been ever since. I think once you start that journey, any other journey just seems so small by comparison. This is where the kombucha came in. On the bottles, we say ‘Start living life from the inside-out…’ It started to turn into something that I felt had huge opportunity.

What inspired you to create this product range?

My wife and I were fermenting so many things at home: milk kefir yoghurt, beet kvass, sourdough bread and kombucha.

We thought kombucha was amazing. By its very nature, it was a product that was growing—rather than one that’s just being reduced to numbers and an end point. The bacteria continue to ferment, so it also gets better and stronger with age. The essence of that is such a beautiful change on the idea that the older you get, the harder it gets and the worse it gets.

As you can tell by what I’m speaking about, the mental health side was a massive part of it too.

It wasn’t like I was drinking kombucha and suddenly thought, Oh wow, I feel like I’m no longer down! It was a realisation that the relationship with the body, the mind and life itself was about harmonising, growing and expanding.

“For so long, I’d tried to control everything on the outside”

For so long, I’d tried to control everything on the outside. I ate protein and whatever calories I was told I had to eat. I ate straight after training, before this, after that, evening waking up during the night. I had no connection with my internal environment.

One of the realisations was that everything we eat becomes the body. For both mental and physical health, it’s about cultivating that inner environment and allowing what’s possible to flourish.

We came to see that kombucha has this life-life connection through the living nature of the drink itself. I didn’t realise until not so long ago that we have more bacteria than cells! Kombucha has a sense of working with the body, and not creating a price to pay later on.

A lot of it is speaking about this business and trying to establish a credible reason for why I’m involved in such a thing! That’s the point of talking this way. I’m not here saying that a mate gave me a kombucha once, I liked it and thought, No one’s doing that. It has to be a stepping stone to something bigger.

We want the product to become something that people can invest in and involve themselves in. Further to that, we want that message of ‘bigger and better as you get older’ to be not just an idea for people, but an experiential truth.

When I was a rugby player, I wanted people to make statues of me, I wanted to be in the record books, and I wanted people to talk about me as being the best forever. In getting all these things, you create so much damage. Actually, you want to tread so lightly that you have an impact without anyone knowing you were there. 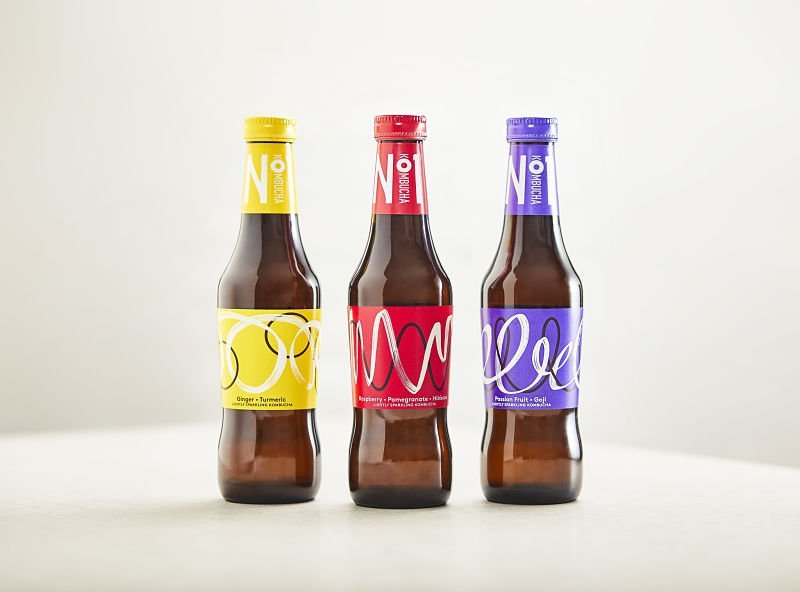 That’s why the packaging is also a major part of what we’re doing. At the moment we’re in amber glass, which is 50% recycled and fully recyclable. We have fully recycled and recyclable paper labels. But it’s not good enough for us, and it never will be.

Leaving no waste is the ultimate sign of harmonising with the planet, and part of the route to becoming bigger and better as you get older. It’s an amazing thing to attempt, especially in the convenience market, which probably has one the highest waste levels.

Health is being. And that brings you into total connection with everything.

It’s the sense that health is built around a certain amount of body fat, whether your muscular definition can be seen on camera, and or how many times you exercise each week. I’ve been there, and the body becomes a machine that’s working for you.

No one ever speaks about physical health in terms of passion and expression—it’s just an outside-in perspective. That’s why, with the kombucha, we’re very keen to say it’s from the inside-out. Don’t get me wrong, we recognise that it’s a product that goes from the outside-in! At the same time, we’re saying that we’re connecting with what’s already inside.

I really like home-prepared, whole food. There’s just something amazing about seeing truly fresh ingredients. I’ve no problem with scrubbing the mud off carrots; that’s part of the joy. It almost feels like bringing yourself back to your roots and realising that this is how things begin—by getting your hands dirty and involved.

I really like the milk kefir yoghurt that my wife makes. I absolutely love my salads and porridge with walnuts. I’m also really enjoying juicing at the moment. My go-to blend is carrots, celery, cucumber, apple, ginger and turmeric and a lime.

Considering this whole back story, I find it impossible to ever speak on someone’s behalf. At the same time, I find that connecting with the body in a collaborative and compassionate way simply transforms health.

I understand that the reason I’m this size now, compared to whatever size I was, is simply down to food, water, sunlight and probably a few other things I’ve absorbed. Everything I’ve put in is what I’m wearing today as a body.

That understanding is inherent in every decision that’s made. If I’m going to eat meat, it influences the time I take to involve myself in preparation, the gratitude with which I eat the meal and the time I take to digest it. The natural element, the whole ingredients, the quality—everything matters. 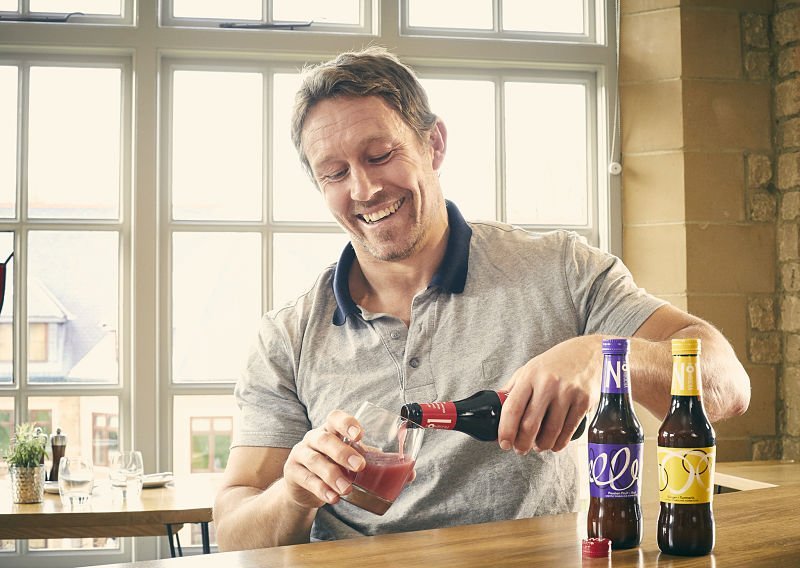 Who do you look up to, and why?

I like the concept of leadership, but ultimately anyone who leads must be going somewhere new in order to be going there first. People have travelled to all corners of the world. A lot of the new ground—in fact, pretty much all of it—is internal. That’s where the challenge is.

Growing up and playing rugby, I had to have the answers. I just had to have them. It was the only way to stay sane and be successful. I longed for the black-and-white, and the grey would just destroy me. I began to see that grey was all there was, and then I realised that there’s nothing there at all—this journey into nothingness is the beauty of it.

I admire the people who are willing to dedicate themselves to going that much further into a space that none of us recognise, but ultimately leads us in the questions that everyone asks. The people who are looking at how to be more compassionate, how to grow and bring things together—I find that absolutely inspiring, whatever field they’re in. That’s the only way the transformation that’s going to take us to the next level can happen.

Everyone’s looking to move the world so it can create that inner environment, instead of just creating the inner environment that then moves the world. That shift is good enough for anyone to realise that there’s a new life to be lived, and it begins every single moment.

As much as everyone talked about a love for playing rugby, for most of my career I was driven to win and to be recognised.

If I’d been given a contract before each game and told that I could sign it—which would guarantee me the result but would have meant that I didn’t get to play—I would have signed that contract for most of the games. And that was simply down to anxiety, fear of failure and the need for recognition. It was about defining success by what you’ve got and what’s in your life.

Another thing that people might not expect about me is that I’m sure I’ve failed more times than anyone I’ve met. For every time I kicked a ball over at the end of the game to win it, I can remember three times as many experiences where I tried to do the same thing and failed.

The beauty is that you can reinvent yourself after each one, which is the phenomenal power of life.

Aside from good health, what do you cherish in your life?

The most precious thing is the gift of being able to say that you are, or ‘I am’. Within that space comes family, comes opportunity, comes friendship, comes everything else. At the end of the day, quality of life comes down to the quality of your experience. That comes first with the being, and then the doing becomes a joy.

Now, trying to connect the convenience of the product market to the ‘I am’ space is not straightforward. But we’ll get there—one day!