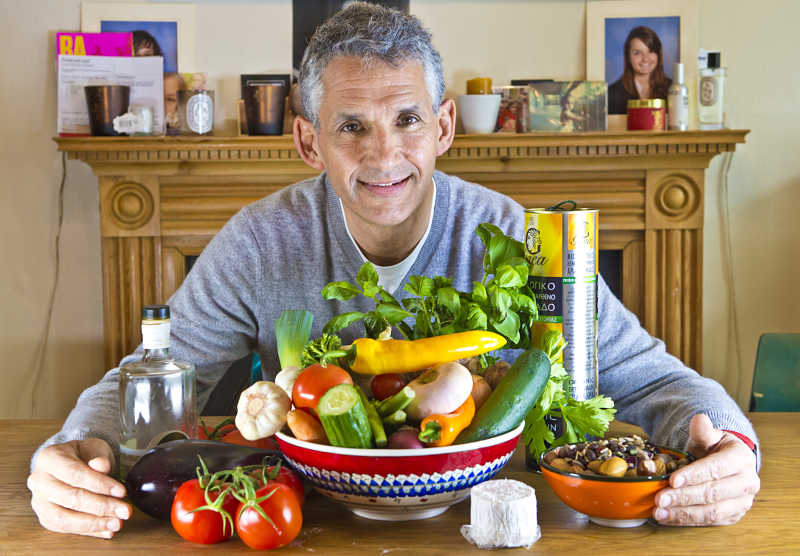 Tim Spector is a Professor of Genetic Epidemiology and the Director of the TwinsUK Registry at King’s College, London. He has been studying twins for more than two decades, during which he’s investigated the interaction between genes and lifestyle—and challenged perceptions about disease and ageing.

He has published close to 1,000 research articles, and is ranked in the top 1% of the world’s most cited scientists. He is also the author of three books, including the bestselling The Diet Myth. His fourth book will be published next year.

In this interview, Tim shares the details of his unusual career path, reveals how his diet has changed, and explains why we all need to rethink health…

My job is sort of indescribable. I’ve managed to keep changing it for 25 years.

Although I trained as a doctor and did the usual junior doctor stuff, I always knew my passion was in research. I started seeing this twin cohort 25 years ago. That was my one really good idea, and everything else has followed from that.

We looked at heritability of disease and genes and then, eight years ago, I suddenly discovered the microbiome. This, to me, was really important because I’d been studying identical twins for years, seeing how similar they were and latterly seeing why they were different. Why did they die at different ages? Why did they get different diseases? Why didn’t they both get cancer if one got cancer?

That’s what got me into this whole idea that everyone has different microbes, and therefore everyone responds differently to food. That really has been the focus of my research for the last five years—and it formed the basis for my last book, The Diet Myth. We need to start rethinking how we look at our health.

I run a department of 70 people at King’s College, London, which comes with writing papers and grants. I’m just finishing another book on the science of food. I’m helping a spin-off company develop personalised nutrition as well. So I’m a bit too busy—but I realise I’ve got a great job, because I love coming to work every day.

What inspired you to work in this area?

I wasn’t the average medical student. I found lots of it fairly boring, and I did as little work as possible.

There were, however, a few areas that I found really interesting, and so I’d go into great depth on those. There was a little module on public health and epidemiology, which offered the chance to do some research on your own. I ended up looking at coffee drinking and cancer of the pancreas. I wrote that up as a letter in The Lancet and got a real kick out of it.

I like that detective work—I’m naturally very curious and like to challenge what people say is dogma or truth. I realised that was what I was good at but, because it’s hard to go into research straightway, I ended up having to work as a consultant rheumatologist first.

You need a thick skin in the world of research, because people don’t always like being challenged—and academics don’t like you moving into their area!

I get up in the morning and have my healthy breakfast: homemade sourdough with some French goat’s cheese on top; or kefir with berries, nuts and seeds. I consider these foods to be healthy for me, but they may not be healthy for other people.

I meditate, and then I cycle to work. My day is filled with interviews and meetings—this morning, for example, I spoke to another group from King’s who want to look at pollution levels in our twins—and I deliver talks frequently too. During the day I’ll also try to answer some emails, speak to my agent and publisher about getting the timelines for my new book, and then I’ll try to find time to look at my tweets on the way home.

I cycle home again, so I combine my exercise with my commuting. I try to have a 20-minute meditation in the evening, and I also cook to relax. That’s something I’ve got more into in the last few years. My diet has really changed from traditional guidelines (i.e. the low-fat diet that most doctors recommended) to one that’s higher in fat and slightly lower in carbs.

At some point I switch off the machines, but not before watching some dumb series on Netflix.

It means staying free of disease and feeling energised.

As a doctor studying epidemiology, we look at health as the absence of disease. But when we’ve done surveys on thousands of our twins, we find that if we ask them about, say, 20 different conditions, we might find three out of 3,000 haven’t had any (or simply don’t report it). Virtually everyone has had some problem.

Health is a relative term, and it’s largely based on your age and your expectations. It’s not an absolute: it’s a spectrum.

That you can cure it all with a tablet.

That’s a tough one because I’m now Mr Diversity.

When I was experimenting for The Diet Myth, I went vegan for six weeks. I realised I didn’t miss meat, but I did miss cheese. I’m a real sucker for a cheese bake, a nice lasagne with a crispy top or pommes dauphinoise. So that’s my way of saying that if I had to take one thing out of my diet, I wouldn’t want it to be cheese. I’d miss wine as well.

Eat as many diverse plants as you can.

There’s a guy called Jeffrey Gordon, who’s considered the father of the microbiome. He started it all off in the late 1990s.

He’s trained most of the top people in the world, and he continues to beaver away in St Louis, Missouri. He doesn’t give interviews, he doesn’t do press releases—he just gets on with it. He’s a real gentleman scientist.

As a medical student, I was in a comedy review group that was great fun. I think I could have been a stand-up. My comedy is very black, very dark—like Jack Dee, I guess.

There’s definitely a part of me, a performer, that’s been supressed for many years as a boring doctor. It’s actually why I like giving public talks. I’ve recently started doing them without slides and notes, and just sort of winging it instead. That feels a bit edgy.

Aside from good health, your family and friends, what do you cherish in your life?

I cherish the excitement of doing something new, whether that’s going to new places, eating new foods or doing some new research. I like being out of my comfort zone—it gives me a real buzz.

We’re pushing boundaries with the PREDICT study. We’re doing it so we can develop an app that will create personalised diets, showing individuals which foods they should be eating and which they can avoid. If we can get people interested in their own gut health and what they’re eating—via a cheap app that everyone can have—I’ll die happy.